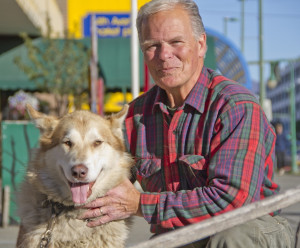 Rod Perry with his malamute Phoenix.

At the northeast corner of 4th Avenue & E Street in downtown Anchorage a sprawling homemade canopy of polished spruce beams and heavy canvas crowds the busy sidewalk from June until August.  A brightly lettered sign above the canopy encourages visitors to stop and meet Iditarod musher Rod Perry, an adventurous author who ran the first Iditarod in 1973.  For the past five years he has spent his summers serving as Anchorage’s self-appointed Iditarod ambassador.  He greets each visitor with a friendly smile as they examine the books spread between carefully balanced birch logs.

Perry describes himself as a “hopeless romantic and gold rush era junkie”.  He moved to Alaska fifty years ago to make movies and worked his way across the state as an oil worker, commercial fisherman, hunting guide and game biologist.  His first dog team was purchased in the early 1970s for a film called “Sourdough” about an old time Alaskan trapper battling the encroachment of modern civilization and he quickly fell in love with mushing.

He met Iditarod founder Joe Redington through friends in the winter of 1971 during the very early stages of Iditarod planning, though he is careful to explain that he had no involvement in the race before he competed.  “Joe needed mushers.  Back then we might have had three dozen people and nobody knew what they were doing because it had never been done.  In order for us to go out there knowing it was going to be sketchy, incomplete and sometimes nonexistent we had to put people out there that were virtually impossible to kill.”

Perry proved himself among the invincible and placed 17th in the first race after 30 harrowing days on the trail.  He tried again in 1974 and shaved four days from his record to finish 14th.  His final attempt came in 1977 when he placed 19th with a 17 day finish.  He stopped mushing in the late 1980s as he started a family and moved on to other interests, but never lost his passion for the race or the trail. 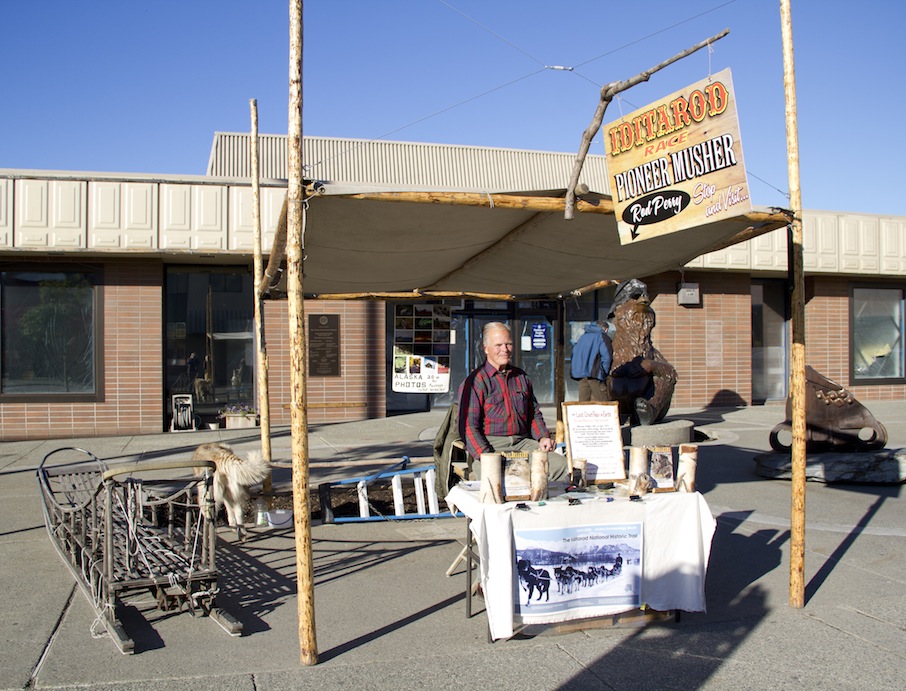 Rod Perry sits at his booth waiting for visitors to stop by and chat.

By 2009 Perry had finished the first volume of his book “Trailbreakers: Pioneering Alaska’s Iditarod” about the rich gold rush history of the trail.  After it was published he approached the Anchorage Downtown Partnership with the idea of an Iditarod attraction open during the summer where he could sell books, talk to tourists and provide additional visitor information for the city.

“They didn’t have anything down here celebrating the Iditarod trail,” said Perry.  “How many people come to Alaska?  How many come here and would thrill to some kind of Iditarod encounter?  So I was after them.  Why don’t you have a banner across the street?  Anything.”

Perry’s passionate perspective on the race and unique ability to engage and entertain strangers promised a perfect solution to this gap in tourist topography and the Downtown Partnership soon offered him a spot next to the log cabin at the Anchorage Visitor Information Center.  He remained there for one season before moving to his current location in Bear Square and now hundreds of people from all over the world visit the booth on busy days to listen to his colorful stories and pet his hundred pound Malamute named Phoenix.

“I never did use the dog until this year,” he said.  “I could see that the addition of a big, beautiful malamute doubled what I called my Attention-Attraction Zone.  There’s no amount of signage that I’ve ever had that was worth a tenth as much as having that dog here.” 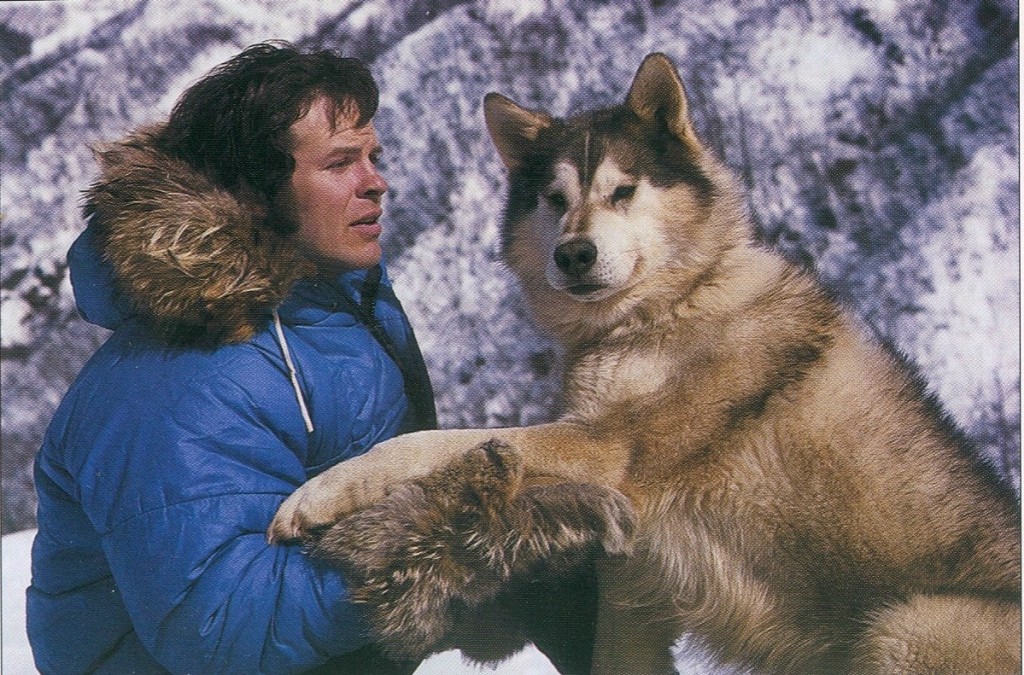 Rod Perry with his lead dog Fat Albert after the 1974 Iditarod. (Photo courtesy of Bill Devine.)

Perry is well-acquainted with the popular appeal of sled dogs.  A sturdy husky named Fat Albert led Perry’s dog team to Nome in both 1973 and 1974.  The comical and high-spirited lead dog was so well-covered by the media that he became a minor national celebrity.  During the 1974 race The National Observer ran stories about him for twelve weeks straight and a 1976 Sports Illustrated article claimed that Fat Albert did for the Iditarod what Babe Ruth did for Yankee Stadium.

“Who can keep from having their soul stolen by those great sled dogs of the north?” asked Perry.   “People are just in love with dogs.”

For more information on Rod Perry and his Iditarod books, please visit http://rodperry.com/.