Layton Lockett has been Adak’s city manager since 2010.

When Layton Lockett was in grad school his professors asked him to build spreadsheets, design marketing plans and participate in grueling 48 hour management workshops full of thought experiments like, “If you were stranded in a plane crash, what items would you take to survive?”  His classmates made fun of him when he chose Hershey bars and duct tape from the list, but to an Alaskan it just seemed like the best choice.

He is now the city manager of Adak and using the same common sense approach to help the city survive a different kind of crash.  But in a community where 30% of the annual budget goes to utility costs and their largest employer went bankrupt this year he needs a lot more than duct tape and candy bars.

Lockett’s family moved to Alaska in 1998 and he was raised further up the Aleutians in Nelson Lagoon.  He graduated from UAA in 2006 with a degree in Business Administration and began working at a non-profit organization as a tax consultant.  He heard about the city manager job while his mother was working at as a community health aide at the clinic in Adak and he came to visit for Christmas.  He interviewed with the city council and was hired in October 2010.

Since then Lockett has been working to restore financial solvency to the troubled city and find creative ways to lower their power costs.  Adak’s diesel power plant was built in 1964 and inherited from the Navy when the base closed in 1997.  TDX Adak Generating, the local utility, reported that they spent $1.2 million on diesel fuel for the plant in 2012 and charges consumers $1.13 per kilowatt hour for electricity.  The State of Alaska’s Power Cost Equalization program subsidizes $.80/kWh, but actual consumer cost is still $.33/kWh compared to about eight cents in Anchorage.  The PCE program paid out $290,000 for Adak residents last year.

Lockett began investigating wind and hydroelectric options in 2011 and after receiving several grants for alternative energy studies he hired an engineering firm this year to bid on the projects.  Beyond the dam upgrades and wind turbine installation, Adak would also need to modernize their power lines and distribution infrastructure to interface with alternative energy sources. 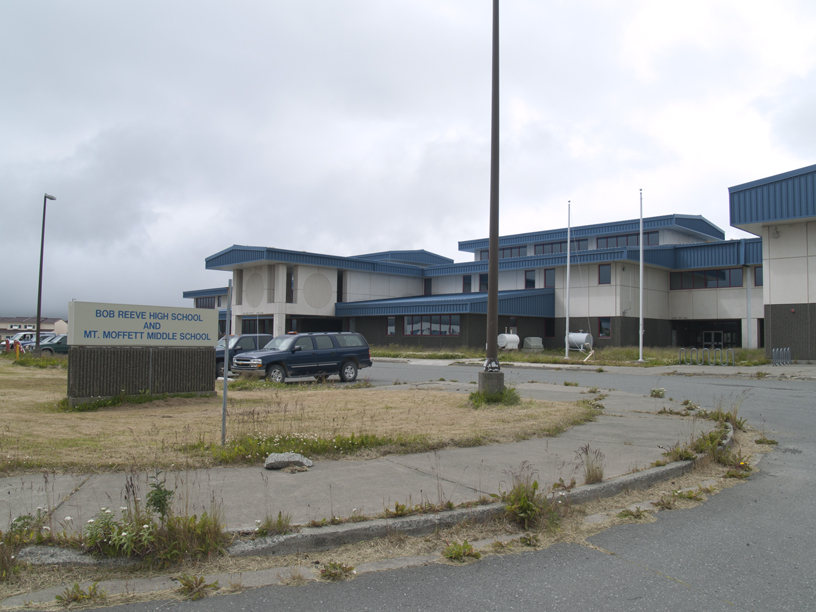 Adak’s public offices, school and health clinic are housed in one building to conserve utilities.

While balancing the books and juggling electric bills he received yet another piece of bad news: Icicle Seafoods was closing the fish plant in Adak after only a year and a half of operation.

“We’re like, whoa, are you kidding me?  The voters just enacted a raw fish tax and they literally felt like they got slapped in the face.  It’s like, shoot, you didn’t even give us a chance to try.  All of a sudden that turns into the bank being told by the federal government, get rid of it.  Get rid of the stuff.”

When the fish plant went up for public auction the city began to worry that it would be purchased by scrappers who would disassemble the facility and destroy any chance of attracting a new operator.  Without any other industries, Adak’s financial future was at stake and in June the city purchased the plant for $1.8 million. The purchase required shaking some city couch cushions to find enough cash, but the gamble paid off.  In October Adak sold the plant to a newly formed company called Adak Cod Cooperative LLC and hopes they will open in 2014.

Despite holding the city together with duct tape and riding a roller coaster of profit and loss, Lockett says he has learned a lot from the job.  Adak will likely be his last stop on the Aleutians and he plans to move back to Anchorage someday, but he is grateful for all his experiences.

“A true manager or a leader is supposed to have the creativity to get everybody in the room and make them all work together.   Where else could I be going up against a national airline and convincing them… Is there a deal to be worked out?  Or sitting with Trident Seafoods talking to their CEO and working on a million dollar deal.  All these experiences I’ve had…  I mean, I couldn’t get this working at BP.  So this has been very fun.”