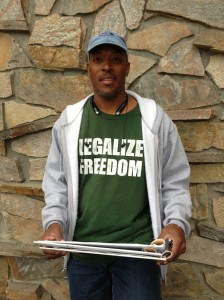 Arenza Thigpen Jr. is a Direct Democracy Lobbyist. Most people would call him a petitioner or signature gatherer, but after years of working issues and collecting autographs for ballot initiatives he developed a new title to better describe his role in the political process.

He openly boasts that he has registered more people to vote than anyone else in the State of Alaska and estimates that his all-time record was registering 250 people in one day.  He has personally recruited thousands of new voters and worked tirelessly to educate the public on political issues.

He is so passionate about this responsibility that last year he founded a non-profit organization called the International League of Signature Gatherers.  He conducts regular meetings to promote education, discuss developments in the industry and ensure that his members are being treated fairly.

“We’re the guardians of democracy,” he said.  “Seriously, it’s almost like a gang.”

Thigpen was born in Tuskegee, Alabama, but dreamed of moving to Alaska since he was a teenager.  By the age of 22 he saved enough money to move and has been living in Anchorage for the past twenty years.  His career as a DDL began in early 2000 when he become a Registrar and started working petitions.

“By being involved in this I’ve managed to be an inspiration because people now see that there’s a way out.  They’re sick of legislators making all the decisions and then not telling them about it.  Whereas you’ve got this grass roots operation that gives people a chance to get involved and make a difference.”

He has traveled all over the country working issues from Florida to California, but always maintained residency in Alaska.  His proudest moment as a petitioner was helping to collect enough signatures to require a 2007 vote on the same day airborne shooting ban aimed at strengthening regulations on aerial hunting of wolves and grizzly bears.

Thigpen is currently working a petition to raise the minimum wage in Alaska from $8.75 to $9.75 an hour.