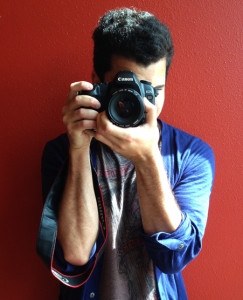 Don Barrington poses with his camera.

When Don Barrington started The Traveling Piano project he had no idea that photography could cause so many problems with local law enforcement.  But it’s hard to run very fast with a piano so when the Alaska State Troopers, Fairbanks police and UAF campus security showed up at various shooting locations he told them all the same thing: I’m doing a photography project.

The Traveling Piano was conceived between semesters at UAF as a personal photography challenge and completed over three manic days in January of 2012.  After an extensive search he found the perfect piano in a local thrift store and spent more three weeks scouting locations.

Like most college students he was long on ambition and short on cash.  When he realized he could only afford three days of trailer rental he decided to shoot the entire project in the equivalent of a long weekend.  He enlisted the help of a friend in the film department to assist with lighting and recruited other friends and family to move the bulky piano around town in sub-zero conditions.

Over the next few days Barrington photographed the piano at eight different locations including the Trans-Alaska Pipeline, the Tanana River, a local bird sanctuary, a set of train tracks, an ice rink at UAF, a sunset hill near campus, a tunnel at Alaskaland and an abandoned cabin destroyed by fire.

The Pipeline was their first location, but to get the right perspective he had move the piano across a bridge and field from the parking lot at the Fox Visitor’s Center.  The piano was much too heavy to carry so the crew devised a “leapfrog method” of sliding it across the snow with a piece of plywood.

“I just wanted it by the Pipeline somewhere to make it look as small as possible,” said Barrington.  “I shot it very wide because I thought that was really important to see how big the Pipeline is versus the piano.”

His favorite photo came the second day when they took the piano to the Tenana River.  After two hours of moving the piano down to the river and throwing snow around to give it a “natural look” he was losing light fast and still missing the perfect shot when suddenly a dog musher they saw in the parking lot came racing across the ice.

“We were getting ready to wrap it up and then all of a sudden the dog mushing team comes back.  That was basically luck.  It was a moment unlike any of the other moments because it was spontaneous. I was really happy with that shot and how it played out.”

After printing and mounting the photographs into frames he displayed them at a series of events in Fairbanks where he sold all but one of the prints.  The project was most recently shown in Anchorage this summer for a First Friday event at Moose A La Mode on Fourth Avenue.

Barrington graduated from UAF with a photojournalism degree in May of 2012 and traveled to Australia to work with a group of wedding photographers he met on a study abroad trip.  He moved back to Anchorage a year later to start his own photography business specializing in weddings and portraits while continuing to work on personal projects.

“One of the most important things I learned in photojournalism is capturing a frame that actually tells a story.  One moment that you can capture with one image to tell that story.  I really like that sense of natural moments and I try to find that in all the images I shoot.”

For more information on Don Barrington and his photography, please visit his web site at http://donbarringtonphotography.com/